One hundred years ago while the United States was fighting the Great War (WW1) in Europe, on the other side of the globe the U.S. Army Coastal Artillery Corps was completing construction work on a unique military installation that would play a vital, but now largely forgotten part in the WWII some twenty years later.

At the mouth of Manila Bay just off the coast of Philippines lies a huge battleship-shaped, immovable concrete structure that was built in the early twentieth century to defend Manila. Known as Fort Drum, but commonly referred to as the “concrete battleship”, this heavily fortified structure roughly resembles a concrete ship. Fort Drum stands on an originally barren rocky island called El Fraile that was levelled by the U.S Army between 1909 and 1914 and built up with thick layers of steel reinforced concrete into a massive fortress, 350 feet long (106 metres), 144 feet (44 metres) wide and rising 40 feet (12 metres) above the water.

The idea of Fort Drum was created after the Spanish–American War in 1898 when the Board of Fortifications decided that the United States needed to better fortify overseas territories, especially harbours. One of the primary areas that the Board of Fortification decided to focus on was Manila Bay in the Philippines. Originally, the fort was to be the control centre for a mine network across the Bay. However, due to inadequate defences in the area, a plan was devised to level the island and then build a massive fortification.

The fort was topped with a pair of armoured steel gun turrets, each mounting two 14 inch (355mm) guns. Searchlights, anti-aircraft batteries, and a fire direction tower were also mounted on its upper surface. Armour was provided by 25- to 36-foot (6- to 11-metres) to thick fortress walls that protected extensive ammunition magazines, machine spaces, and living quarters for the 200 man garrison. After the outbreak of war in the Pacific on December 7th, 1941 Fort Drum withstood heavy Japanese air and land bombardment as it supported U.S. and Filipino defenders on Bataan and Corregidor. Fort Drum surrendered to Japanese forces following the fall of Corregidor Island on May 6th, 1942 and was subsequently occupied by Japanese forces.

In a bid to recapture Manila, Fort Drum was assaulted by US forces on April 1945. After a heavy aerial and naval bombardment, US troops gained access to the deck of the fort, and were able to pin down the garrison below. But rather than attempting to break in, the troops pumped fuel into the air vents of and ignited it. The Japanese inside the fort were completely incinerated, while the fort burned for several days. When the Americans could enter the fort, they discovered 65 charred bodies. 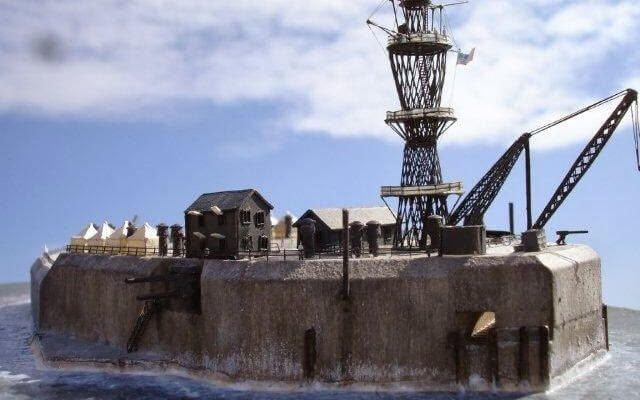 With the bay forts, including Fort Drum, thus neutralised, Japanese resistance in the Manila Bay area was ended. The ruined hulk of Fort Drum, including its disabled turrets and 14 inch (355mm), still stand at the mouth of Manila Bay.

Impressive stuff, right? However, this magnificent ship has been slowly forgotten across the years. We’re not quite sure why, but since it is Remembrance Day 2017 we feel that it should be celebrated as a CONCRETE HERO!